I wonder how many people know where the accordion originated?  The first reed instrument is believed to be a Sheng which originated in China around 1740.   The accordion has a wonderful history, has been made almost worldwide and it is impossible here to give more than a flavour and a pointer to more detailed publications.  The earliest accordions were made by Friedrich Buschmann in Germany about 1822 and Cyril Damian in Austria in 1829.  Paulo Soprani  is credited with founding the Italian accordion industry in 1863.  Hohner, from Trossingen in Germany, who produced some of the best known accordions, did not actually start making accordions until 1903.

You seldom see a Scottish dance band without an accordion. They may not originally be a Scottish instrument (but then neither were fiddles and bagpipes if you go back far enough!).  However,  accordions have been used in Scottish music for over a 100 years.  Melodeons known as “Bothy boxes” were imported in the late 1800s. Sir Jimmy Shand and the Wyper Brothers learnt on these and they were played on many old 78 rpm records. 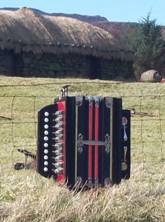 Bothy boxes were cheap, imported from Germany and could be one or two rows. 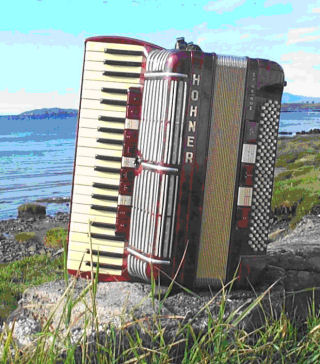 Victorian ladies played Flutina’s imported from France and in the 1907 Army and Navy Stores Catalogue there is a description of a Harmoniflute as “Organ Accordion: Best French made with stand 66/0”. In the 1930s many expensive and highly decorative accordions were imported from Italy and played in dance bands at hotels, such as the Savoy in London.